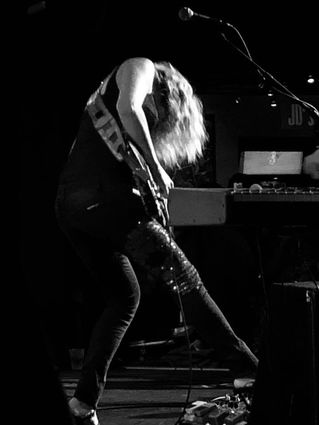 In 1976 Ana Popovic was born to Blues Man Milton Popovic in Belgrade, Serbia. Milton gave Ana the gift of blues music starting at 15 years of age. Ana Popovic's first band was in the year 1995 called "Hush", combined with Blues, Funk and Soul, Ana lead the band until she started her solo career in 1999. In 1998 Hush performed in over 100 performances in blues clubs and blues festivals releasing their debut album "Hometown" PGP-RTS Label.

In 1999, Popović formed the Ana Popović Band in the Netherlands. In 2000, she appeared, alongside Eric Burdon, Taj Mahal, Buddy Miles, Double Trouble, Eric Gales and others keeping her fusion of funk and soul.

Recoded in Memphis TN, "Hush", her first solo album was 2001 released on the Ruf Records label followed by "comfort of the soul" 2003 produced by Gains.

All following albums are:

• 2003 Nominated for Best Blues Album at the Jammie Awards

• 2004 Winner of the Jazz a Juan Revelation award in Juan-les-Pins, France.

• 2010 Nominated for Best Overseas Artist at the British Blues Awards

25 years and still going strong with no end in sight, Ana Popovic will continue to "Storm" the music industry with the Blues in her own way.

Next Week, let's look at "The Rolling Stones", yes, the Greatest Rock and Roll band, plays the Blues, always has, always will.