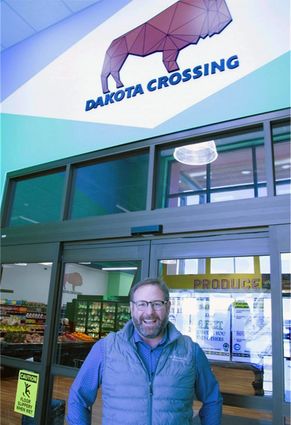 Many services are being added including; check cashing, money orders, money wires, online shopping for contact free convenience and self-checkouts. Godfather's Pizza is also being considered.

Buche promises to bring better promotions to Sisseton with at least three large meat sales throughout the year and one produce truck sale. Buche Foods has a smart phone app with hundreds of dollars in digital coupons offered at all times. For those customers without a smart phone, there is an option at the customer service counter to get those great deals.

The C-Store sections of Dakota Crossing will be expanded as well. With RF's Reward's Card, there are two to four gas discount promotions offered each month saving customers anywhere from 17 cents per gallon on St. Patrick's Day, March 17th to saving $2 per gallon on certain occasions. There are also reward's card clubs for free product or discounts after 10 purchases of pizza, pop, coffee, etc. Discounts are good for 60 days.

RF Buche is a 4th generation grocery. The GF Buche Company was started by his great-grandfather in Lake Andes in 1905 and consists of 15 locations throughout South Dakota.