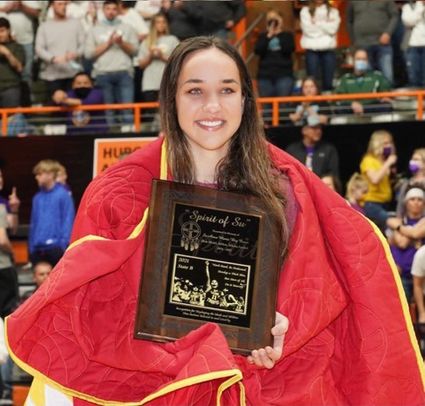 Raven with the "Spirit of Su" Plaque and Star Quilt.

As South Dakota basketball fans were glued to their televisions sets last week to watch State Basketball Girls Tournament games, thanks to the SDPTV broadcasts of the SD State Girls Class B, A, AA . One of the teams, the Corsica/Stickney Jaguars with Senior player Raven Barse, who led the team in scoring over 13 points per game and over 8 rebounds per game during her senior year. Raven is a "Spirit of Sue" award recipient in the 2021 SD Girls Class B Tournament. The award is given each year to a Senior with outstanding athletic ability, character, leadership, sportsmanship and grade point average. The award is in Honor of the Late SuAnne Big Crow, Pine Ridge Thorpes. 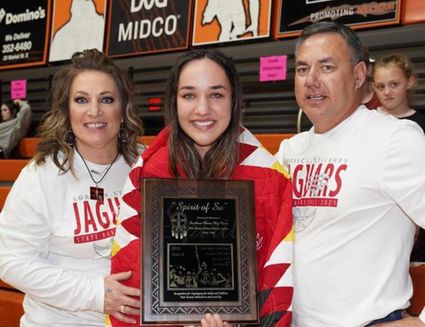 Raven will be attending SDSU in the fall with her focus on academics, and will not be pursuing college basketball. "Be persistent, dedicated on your schooling first."

Ravens grandmother the late Delores Barse "Dutchie", was a very well respected, treasured elder on the Sisseton Wahpeton Oyate. She was well known for her beautiful hand made Star Quilts.