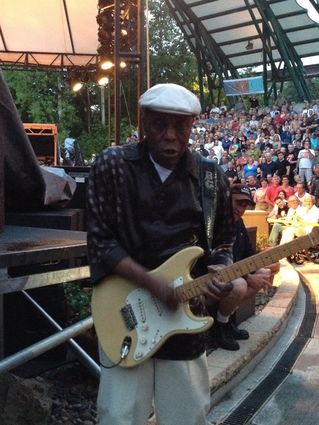 When you think of good time, upbeat Chicago Blues, you are most likely thinking of legendary Blues Man Buddy Guy. Born on July 30th. 1936, George "Buddy" Guy was raised in Lettsworth, Louisiana with humble beginnings, His parents were sharecroppers and Buddy would pick cotton for $2.50 per 100 pounds.

During the holidays the blues men of that area would play in houses and eat, drink and take a nap, and it was this time Buddy would play their guitars, Buddy made his own stringed instrument using a rubber band and screen fragments from the front door called the "Diddle Bow", years later he got a Harmony 6 string and latter donated it to the Rock and Roll Hall of Fame.

In the mid-50's Buddy moved to Baton Rouge, Louisiana where he to a job as a custodian at the University of Louisiana and it was there that Buddy started performing with notables like, Papa Tilly and Raful Neal, his influence was Muddy Waters and performed with him in latter years. Buddy also influence guitarists like, Jeff Beck, Stevie Ray Vaughn and Keith Richards just to name a few.

In 1957 Buddy recorded two songs that were never published, but he never gave up on his dreams and the result is a career in Music that stood the test of time, I got to see him in 2015 in Minnesota, I must add that it was one of the better shows I have seen.

Eric Clapton describe Buddy as "the best Guitarist player alive", Clapton recalled seeing Guy perform in London's Marquee Jazz Club in 1965, impressing him with his technique, his looks, and his charismatic showmanship. he was also labeled 23rd best guitarist out of 100 in Rolling Stone Magazine, His song "Stone Crazy" was ranked 78th. In the same magazine.

On March 14th. 2005 Eric Clapton and B.B. King inducted Buddy into the Rock and Roll Hall of Fame. Buddy also was awarded many more: Guitar Center Hollywood Rockwalk (1996), He has won eight Grammy Awards, Louisiana Hall of Fame (2008), Musician Hall of Fame (2004) and the list goes on, Buddy also wrote a biography titled "When I Left Home, My Story (1996), He also inspired blues fan Alan Harper to write a book about him in 2015 entitled "Waiting for Buddy Guy at the Crossroads.

Buddy Started to record with Chess Records with his debut album: I left my Blues in San Francisco 1967, and his most recent: The blues is Alive and Well, (2019) under the label RCA/Silvertone. 18 studio albums as well as collaborations of 10 albums with Junior Wells, 5 with Phil Guy and 1 with Memphis Slim. As of 2019 Buddy performs at his Chicago club "Legends" 130 plus shows year as well as showcases and world tours and he's not letting up.