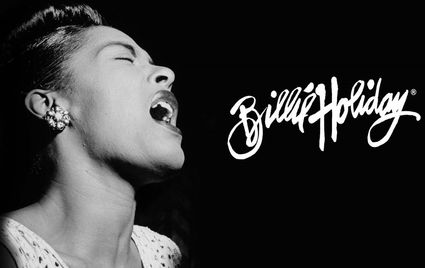 A few days ago, I watched Lady Sings the Blues staring Diana Ross, though I did love the movie, it was not true to the real Billie Holiday. Most people think she was a timid sad product of the "Biz", but really, she was a force to be reckoned with, loud mouthed with a vocabulary like a sailor on shore leave, which did not go very well with the nuns when she attended the "House of the good shepherd for colored girls". she took care of her self-growing up in the streets of Baltimore. She had an "insatiable appetite" for life, and she lived it by her own terms.

Born Eleanora Harris on April 7th. 1915, She spent her childhood years growing up in the streets of Baltimore, Her Father was a Jazz guitarist, and the mother was a cleaner.

In 1928 Billie and her mother moved to Harlem to find the Jazz age happening. She started singing in the clubs just for tips, Performers did not get paid by the clubs, but by patrons. It was in clubs where she learned improvisation while singing, and it was at a club called Covan where she impressed record producer Jon Hamond, he teamed her with Benny Goodman and recorded her firs song, she was only 18 years old. She signed a recording contract with Brunswick in 1935, Shortly after she started to appear regularly at the Apollo Theater.

When she toured with the Count Basie band, she had to deal with segregation, she could not stay at hotels in some cities, she stayed with black families when she toured, colored only restaurants, even toilets. Saxophonist Lester Young toured with Billie and started a close relationship that lasted for years.

Dealing with so much racism, she started performing at Barney Josephson's night club called Café Society, this was the first and only integrated night club at the time, it was at this night club she was approached by Able Meeropole with a song she would record called "Strange Fruit", the song was a protest against the lynching of Black Americans, This song sparked many legal problems for Billie and also sparked the begging of the civil rights movement.

She sold out Carnegie Hall several times, and her singing career yielded a lot of money, and she spent it living the high life, Holiday had mainstream success on labels such as Columbia and Decca. By the late 1940's, however, she was beset with legal troubles and drug abuse.

Billie Holiday won many awards including four Grammy's and inductions to "Grammy Hall of Fame" and the "National Rhythm and Blues Hall of Fame".

Billie Holiday left such a legacy, her name will never be forgotten. Unfortunately, the stresses of success and excess led to Alcohol and drug abuse which took her life on July 1959.

From, "Billie Holiday Sings" released on Clef Records in 1952 to "Lady in Satin" released on the label Columbia in 1958, 12 recordings in all along with some live recordings, she left us with a legacy that we will enjoy for many decades to come.