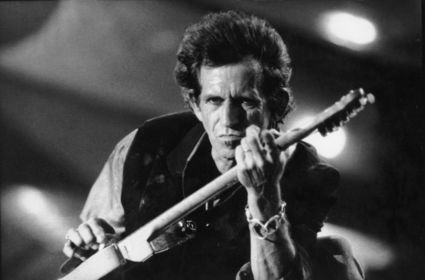 As a guitarist I understand this because the 6th. String can get in the way while playing, especially playing the D chord, but I also know that the 6th. String will give you a fuller sound. Keith also played using a lot of "Open" guitar tuning with his favorite, "Open G" tune.

Richards was born on December 18th, 1943 at Livingston Hospital, in Dartford, Kent, England. To Doris Maud Lydia and Herbert Richards. As a child he grew up in "Post War" England, and it was difficult to get the goods that Keith Liked, especially Blues Albums, one day he meets up his friend Michael "Mick" Jagger carrying a few albums he got from the ship docks, and it was blues albums like Muddy Waters, Louis Armstrong, Billie Holiday, Duke Ellington and others.

As a child he love "American Blues" and wanted to learn to play guitar, His Grandfather Ernie had a guitar hanging on the wall of his living room, and told Keith that when he gets tall enough and grab the guitar, he can play it, as was written in the children's book "Gus And Me" (Published in 2014 by ("Little Brown Books for young Readers") well, on day he stood in front of his grandfather with the guitar, his grandfather asked him how he got the guitar, Keith pointed to a chair with stacks of books That he climbed.

Keith played, recorded, and toured with The Rolling Stones from 1962 to the end of The Tattoo You Tour in 1982, then The Rolling Stones took a 7 year "Hiatus" from the band, Keith started a solo career playing the blues around the world.

In 1988 "The Glimmer Twins" Mick Jagger and Keith Richards settled their differences and resurrected The Rolling Stones and Recorded the album "Steele Wheels" Released on Columbia Records August 29, 1989. then supported the album with a tour in 1989, it should also be noted that Keith Started his solo career in 1979 and continues today.

Keith is also featured in his book called "Life", Published in 2010 by Little Brown and Company, in Life he reflects his discovery of the blues, his bands, family, relationships and drugs. When Keith talked about his book, he said "I Know Who I Am"!

Keith was also in several movies like "Pirates of The Caribbean" and others.

Keith wanted to play like Chuck Berry and with all his influences, he developed a style all his own.