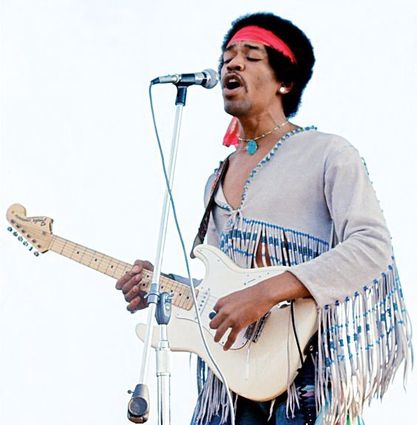 born Johnny Allen Hendrix on November 27, 1942 in Seattle Washington to Father, James Hendrix and Mother Lucille Jeter, He later changed his name To Jimi and had a career like no other.

Jimi spend a couple of years in his early teens creating a performance style using the kitchen broom, his father James got Jimi his first guitar when he was 15 and introduced him to blues music using his saxophone, they would have "Jam Sessions" for hours.

After serving in the U.S. Airborne, where Jimi played in bands, He moved to Clarksville Tennessee and toured in the "Chitlin' Circuit" with The Isley Brothers and later with Little Richard. In late 1966, under the direction of Animals Basses, Chaze Chandler, "Jimi's Manager", he moved to England and formed his band "The Jimi Hendrix Experience" with Drummer, Mitch Mitchell and bassist, Noel Redding. While in England Jimi recorded 3 songs: Hey Joe, Purple Haze and the Wind Cries Mary, which all 3 hit the UK's Top Ten. While in England he played at the Marquee Jazz Club often and was noticed by the guitar greats of the time.

In 1967 he performed at the Monterey Pop Festival where he had a "Jam Session" with The Who's guitarist Pete Townsend backstage, it was there that they were trying to figure out who should go on first, Jimi said, "If I go on after you, I'm out pulling all the stops", the success of the festival shows, started Jimi's Mainstream fame.

Jimi's Mainstream fame lasted only 4 years, in this time frame he headlined two bands, The Jimi Hendrix Experience (UK) and Band of Gypsy's (US). Jimi's greatest performance was in Woodstock when he included "The Star-Spangled Banner" in his set, Jimi's style of guitar playing was more of an assault to your senses as he used loud feedback and effects.

Jimi was the recipient of several awards including: Melody Maker Pop Musician of the year in 1968, Billboard named him the Artist of the Year and Rolling Stone declared him the Performer of the Year and he was inducted into The Rock and Roll hall of Fame in 1992 and soo many more.

Jimi passed away on September 18, 1970, at that time he was the newest member of the Famous "27" Club. Jimi influenced many musicians including Prince. "The Rock and Roll Hall of Fame" describes him as "arguably the greatest instrumentalist in the history of rock music".