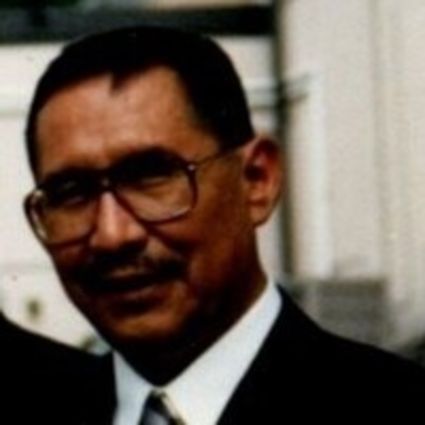 Ed Red Owl was born December 21, 1941 in Santee NE to Violet Blossom Shepherd and Art Red Owl. Ed's father was deployed during WWII and was wounded in action and later died. Violet married Clifford Thompson who was a Police Officer with the Bureau of Indian Affairs and was transferred to many different communities. The family moved home and Clifford became Tribal Chairman, following Ed's maternal grandfather, Hazen Shepherd

Ed attained his education and was an ordained minister in the Catholic Church. He lived at Blue Cloud Abbey for a short time. He left his service to the church because he felt more connected to Dakota spirituality.

During his time at St. Johns University, Ed began working with inmates at the Stillwater Prison in Stillwater, MN. It was there that he met the men who would become the leaders of the American Indian Movement. Ed was assisting these young men with prayer and spiritual guidance during their incarceration. He further assisted by writing the charter documents for the AIM, which was founded in July of 1968 in Minneapolis.

Upon his graduation from St. Johns University, Ed moved to Iowa where he lived and worked for a brief time. He was paid a visit by newly elected Chairman Moses Gill. Mr. Gill asked Ed to come home and work for the tribe in the Planning Department. Ed accepted this offer and began his lifetime of work for the Sisseton-Wahpeton Oyate.

Ed began working in the Planning Department as the Community Planner. A short while into his employment, Ed was asked to serve as Interim Treasurer when the elected Treasurer resigned. Upon his return to his position at the Planning Department, he began working on the Mississippi Sioux Land Claim; a court case in which Sisseton-Wahpeton, Spirit Lake, and Ft. Peck were awarded a financial settlement from the federal government. Ed and the tribal executives flew to the other two reservations and negotiated a split of the funds. During this time as well, a Claims Committee was assembled and Ed worked with committee members to survey the membership on how these funds should be spent. Ed became the Director of Planning, and the Claims Committee became the Reservation Planning Commission.

During his tenure in the Planning Department, Ed worked with the tribal executives to develop the community of Agency Village. There was a lack of cooperation and collaboration between the tribe and city and county governments. Tribal Council and Executives wanted to build an independent community with a center for tribal government and services for tribal members. With this vision, Ed began searching for funding for buildings, infrastructure and operations and management dollars. The Indian Self Determination Act and Public Law 93-638 was signed on January 4, 1975. This act gave tribes access to funding to build and take ownership of services for tribal members. Ed took this as an opportunity to fulfill the vision of independence and sovereignty for the tribe.

In the early 1970's, Ed began networking with local banks and secured a loan to build the first Tribal Office in Agency Village. Shortly after, he completed an application for 638 funding to build a second Tribal Office which would house the BIA. These buildings housed the central government for over 30 years. When the tribe outgrew these facilities, Ed went before Tribal Council and discussed the application for a new Tribal Administration Building. He told council that he would complete and submit the application to the USDA Rural Development Department on the tribe's behalf and that he would gladly complete this work with no compensation. The project was awarded and was one of the largest projects ever funded by Rural Development. Construction was completed on the Tribal Administration Building in 2012.

As a part of tribal sovereignty, Ed sought funding for justice services for the Tribe. This included the structure and infrastructure for the first Tribal Jail, Police Station, Tribal Court, and Juvenile Detention Center. He was able to secure funding for operation and management of these facilities as well, using Indian Self Determination and Economic Development funding.

Ed and other concerned tribal members proposed that the tribe seek to oversee child protective services which were being administered by the State and BIA. Title is a federal policy that allows tribes to operate their own social service organizations, and gives the tribe jurisdiction and oversight over tribal member families and Ed used this policy to bring those services under the tribe. In addition, Ed was instrumental in authoring the Master Contract with IHS. This contract gave the tribe funding for Dakota Pride Center, Community Health Representative, Community Health Education, Health Administration and Maternal Child Health Programs. Ed applied through the Economic Development Administration to build the current Dakotah Pride Center facility. He also wrote the Healthy Start Program foundational documents. All of these programs are currently successfully providing services to tribal members.

Over several decades, Ed wrote numerous funding proposals for the Sisseton-Wahpeton Housing Authority. In the 1970's, Ed successfully secured funding for the Crawfordsville housing project, as well as the infrastructure for Agency Village. Later, he successfully wrote proposals for Barker Hill, Lake Traverse, Long Hollow, and Enemy Swim Housing projects. He also wrote proposals twice years apart to fund new district centers for each of the 7 districts. Ed was employed by the Sisseton-Wahpeton Housing Authority as a consultant, and he sat on the first Dakota Nation Housing Corporation Board.

Ed developed the idea of a Tribal Farm and wrote grant proposals to make this a reality. Ed was introduced to Dr George Norton who worked with Ed to write a business plan for the tribal farm. The tribe was awarded funding which was used to purchase two farms, 100 cattle and farm equipment and 3 years of operational cost. Eventually Ed wrote a proposal for the tribe to receive bison out of Roosevelt National Park, which was the beginning of the current buffalo herd.

In the very beginning of his career, Ed began a land acquisition program for the tribe. Finances at that time were tight, but Ed knew the importance of the tribe acquiring land on the reservation. After 1975, Ed helped secure funding for a Tribal Realty department through PL 93-638.

In the 1980's, when Indian gaming was in the early stages Ed worked with the Chairman to fund a bingo facility. The Chairman found an investor in the Seminole Tribe for half of the cost, and Ed wrote a grant application that funded the other half. Dakota Sioux Bingo was built and was the first large scale gaming enterprise of the tribe.

Ed helped revitalize Dakota spirituality in the community and practiced this way of life. He was the first fire keeper for the Buffalo Lake Sundance and attended this ceremony every year that he was able, dancing in his younger years and participating as a helper later in life. He was an avid historian, researcher, and writer. He was committed to preservation of the Dakota culture, and also wrote a grant for a cultural preservation program for families. Ed was fluent in Dakota, as this was his first language. He also spoke English, Spanish and Latin. He served as the Secretary for the Lake Traverse District for several terms in the late 90's and early 2000's. Ed was so proud to be a Sisseton-Wahpeton Dakota, and his love for his people truly shows in all of the successful efforts he made to help the tribe grow, both economically and socially. One of the most important parts of Ed's life was in caring for his adopted son, Michael Selvage Sr. Ed was Michael's caregiver for many years. Most importantly, Ed was by his side through Michael's 2 terms as Tribal Chairman. Ed truly embodied the term "hunka" being a mentor, advisor and a father figure, not only for Michael but also for his family. Ed passed away at the Tekakwitha Living Center on May 6, 2021.