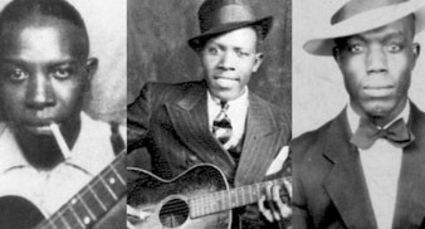 As stated in my earlier writings about the definition of a "Rolling Stone" Robert Johnson was the embodiment of this, Born around May 8th. 1911 to Father Noah Johnson and Mother Julia Dobbs, in Hazlehurst, Mississippi, Robert Johnson became the "King of the Delta Blues".

Robert influenced a bunch of blues guitarist and singers alike, Eric Clapton praised Robert as "the most important blues singer that ever lived", he has influenced movies such as "Can't You Hear the Wind Howl, the Life and Music of Robert Johnson" with scenes acted by Keb' Mo' as Robert Johnson, as well as "Crossroads" starring Ralph Macchio and Joe Seneca with music by Ry Cooper. After Roberts death, he received a few awards including: "Rock and Roll Grammy", "Blues Hall of Fame", The "National Recording Preservation Board" and others, and a few books such as, "Up Jumped The Devil" the real life of Robert Johnson by Bruce Conforth, winning a few awards as well.

In Roberts early years playing the blues, no one wanted to play with him, he played badly according to the blues artists of the time, although not much is known about his life outside of the "Jukes", he disappeared for about Six Months, but then he returned with a talent surpassing all the other artist of the time. All the other blues guitarist were so impressed that he played so well in such a short amount of time, the other guitarists claimed that he could only sell his soul to the devil to play so well, again in the time span that he was gone.

It is well believed that he practiced in a graveyard every midnight at the crossroads near the intersection of Highway 61 and 49 in Clarksdale, Coahoma County, Mississippi.

Robert was so shy that he played most of his gigs sitting on a chair with his back to the audience, his popularity grew so fast that he was commissioned to record 29 songs for the Brunswick Record Label in 1938 and was paid $100 a song, that is a lot of money for the deep south in the 1930's. most of his recordings were on 10 inch platters (78's).

Robert Johnson's life is shrouded in Mysticism, even his death on August 16, 1938, is surrounded with skepticism, but he was the first blues musician to enter in the famous "27 Club". The exact location of Johnson's grave is officially unknown; three different markers have been erected at possible sites in church cemeteries outside Greenwood.

Robert Johnson has been and will be "Re-discovered" in the span of time!

I have always said the Blues Music is spiritual and if you listen the Robert Johnson's Music, you will understand, although it seems that Robert was taunted by the spirits that followed him, is evident in the songs "Crossroads" and "Hell Hound on my Trail", never less, Robert Johnson "IS" the King Of The Delta Blues..