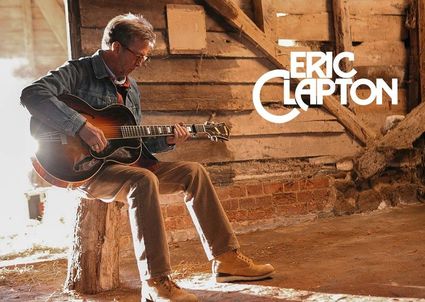 Born March 30th 1945, Eric Patrick Clapton is a Rock and Blues guitarist singer Had a career in music spanning more than 50 years, in 1963, after playing in a few local bands, he joined the Yard Birds, but after a short time he replacing Top Topham, he played with "John Mayell and the Bluesbreakers" and recorded on album with them. Eric was a founding member of "Cream", this project solidified Eric's place in the music industry. After tthat he joined Derrick and the Domino's and recorded "Layla", a recording that showed his true improvisational guitar style. Eric then moved to form "Blind Faith" with Steve Winwood (who he still performs with today).

In 1970 after the success of the last three bands, he embarked on a solo career.

He was named "Slow Hand" is he would change broken string on his guitar while the audience waited. I saw him out side of Boston during the Journey Man's tour in the 80's, I was impressed by the fact the show was based entirely on the music, which gave has show much more meaning.

Clapton cites Muddy Waters, Freddie King, B.B. King, And Buddy Guy as guitar playing influences. In his 2007 autobiography, Clapton referred to Muddy Waters as "the father figure I never really had." Of course there is the Original Rolling Stone, Robert Johnson, which Eric "Covered" with the song "Crossroads".

Eric Clapton is the only 3-Time inductee to "The Rock And Roll Hall Of Fame" and number 2 in the "Rolling Stone's" List of Greatest All Time Guitarist".

Much like most fame, It took it's price, Eric fell into substance abuse in spent some time in Hazelton, a recovery organization, after spending some time there, he donated several of his guitars for future patients.

Erics carrer landed him many awards such as: "The Silver Clef Award" for his contribution in the British Music scene, "tears In Heaven" got him three Grammy Awards, the most recent he was made commander of the Order des Arts et des Lettres of France[.

If you want to hear some good modern blues, I suggest Eric Clapton.