B. B. King and Lucille 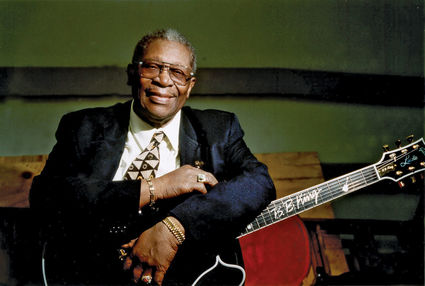 On September 16th, 1925, Riley B. King (later to be known as B.B. King) was born on the Berclair Cotton Plantation near Itta Bena, Mississippi to Albert and Nora King, his father was a sharecropper.

As a young boy he sang in a gospel choir and was attracted to the Pentecostal Church of God in Christ, The minister there would play blues music during his sermon.

It's been said that his grandfather gave him his first guitar at the age of 12 and the minister taught him three chords and King taught himself the rest.

After a few years of playing on the Sonny Boy Williamson's Radio show on KWEM in West Memphis, Kind started to develop his own style of playing consisting of fluid Soloing, Bending, Shimmering vibrato and Staccato Picking, leaving bar and basic chords behind. That is documented in the U2 Movie "Rattle and Hum". Note: Before he called himself B.B. King, he was called "Blues Boy".

Who is Lucille? She was a bar maid in Twist Texas, during King's performance, two men started a fight over Lucille in the bar and tipped over a oil drum that started a fire and everyone was evacuated, King ran back in to retrieve his guitar, then he names most of his guitars Lucille as a reminder never to run back in a burning building to save your guitar. In 2005, Gibson made a special run of 80 Gibson Lucille's for his 80th Birthday.

King's first recording contract was followed by a tour across the US with performances in major theaters in big cities like L.A., Chicago, St. Louis, ect.

In 1991 Beale street developer John Elkington recruited B. B. King to Memphis to open the original B. B. King's Blues Club, and others followed.

The B. B. King Museum

Indianola, MS is the home of the B. B. King Museum and this museum is packed with all the info on B. B. King's life and music career.

Grammy's "The Thrill is Gone", "There must be a better world Somewhere", "My guitar sings the Blues" and so many others, inducted into the Rock and Roll Hall of Fame, 1987, so much more.

B. B. King became on of the most important name in the Blues music, and will continue for many generations to come.

B. B. King was on tour in 2015 when his declining health did not allow him to play anymore, He played till the end, he passed away in his sleep on May, 14th 2015. B. B. King will always be remembered as the "King of the Blues".