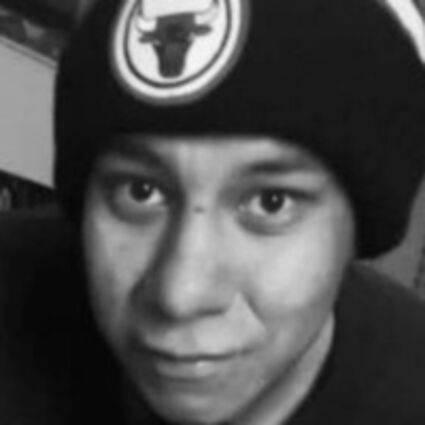 Funeral Service for Bruce Edward Godfrey Jr., 24 of Sisseton, SD will be held on Monday August 9, 2021 at 11:00 A.M. at the Sisseton Wahpeton Oyate Tribal Community Center, Agency Village, SD with Pastor Vern Donnell and Rev. Fr. Charles Chan officiating. Pianist will be Mary Beth Kirk and Billy Kohl. Pallbearers will be Hank Williams, Jr., Clerence “Sinjin” Sartwell, Rex Godfrey, Ryan Hill, Richard “Ricky” Hill and Randy Godfrey. Honorary Pallbearers will be all of Bruce Jr’s family and friends. Drum Group will be Agency Singers. Interment will be at St. Mary’s Episcopal Cemetery, Agency Village, SD. There will be visitation at the Cahill Funeral Chapel, on Saturday August 7, 2021 from 6:00 P.M. to 8:00 P.M. an all night wake on Sunday, August 8, 2021 at the SWO Tribal Community Center, Agency Village. SD. The Cahill Funeral Chapel is in charge of funeral arrangements.

Bruce Edward Godfrey Jr. was born on March 13, 1997 in Sisseton, SD to Bruce Godfrey Sr. and Florinda Crawford. Bruce attended school at Sisseton until the 10th grade. He stayed with his grandma Helen “Shorty”. He helped her with whatever she needed done. He was always helping everyone. He got into some trouble at a young age and was incarcerated for most of his adult life. This is where he learned to bead and cook. He used to tease his dad saying “you can only make 20 fry bread I can make 500. JuJu worked with his dad at Woodland Cabinetry in Sisseton. This is where he learned how to be a little handyman. He was always fixing stuff. He spent every day with his cousin Keisha helping her with his nephews and nieces.