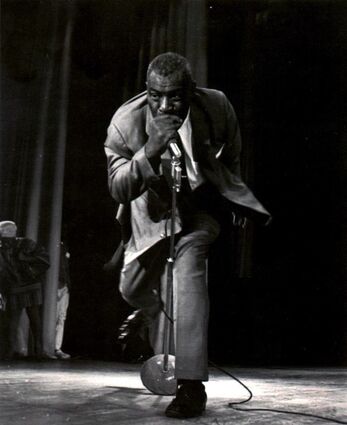 "Smokestack Lightning", "Killing Floor', "Wang Dang Doodle", "Back Door Man" and so many others, When Howlin' Wolf sang and performed, he demanded respect, he was a tall and huge man and had the ability to scare the audience and mold them to his liking as he belted out the blues like no other, one club owner was quoted as saying "no one could match Howlin' Wolf" He was 6 feet and 3 inches and close to 300 pounds, one of his songs say's "Three hundred Pounds of Joy". I personally would have loved to have seen him live.

Born on June 10th 1910, in white Station, Mississippi, to Gertrude Jones and Leon Burnett, and later in his life he moved to Chicago and teamed up with Muddy Waters, Bo Diddly and Willy Dixon became one of the best known Chicago Blues Artist. The Rolling Stone Magazine ranked him number 54 on its list of the "100 Greatest Artist of All Time".

Howlin' Wolf got the name from his maternal grandfather, how would admonish him for killing his grandmothers chicks by reckless handling by squeezing them, his grandfather warned him that wolves will come for him.

After teaming up with Muddy Waters, he recorded several albums for Chess Records; "Moaning in the moonlight" (1959), "Howlin' Wolf" (1959-1962 recordings and so much more. Wolf's last album was recorded in 1973 called "The Back Door Wolf". Wolf died shortly after that due to complications from his Kidney surgery on January 10th 1976.

Wolf has received so many honors, including the US Postal Service with the 1994 29-cent stamp, the song "Smokestack Lightin" was selected for a Grammy in 1973 The Rock and Roll Hall of Fame listed three of Wolf's songs in its "500 hundred Songs that shaped Rock and Roll, "smokestack Lightening", "Spoonful" and "the Red Rooster" and the list of Wolf's honors go on.

Howlin" Wolf made a huge difference in the music Business and the minds in our world.