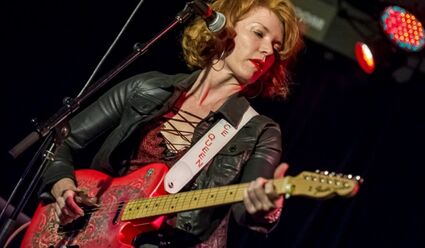 Born Susan Foley on March 29th 1968 in Ottawa Canada, she spent her childhood years listing to Blues Music, after learning how to play Blues Guitar at 13, and landed her first gig at 16, In 1989 Sue moved to Vancouver where she formed The Sue Foley Band and toured Canada, teaming up with Blues Musician Mark Hummel, she went on to tour Canada, America and Europe as well as producing an album Young Girls Blues" in 1992 on Anotone's Label. Working with a number of musicians she went on to record 14 more albums

In May of 2020, Sue won her first "Blues Music Award" in the 'Koko Taylor Award (Traditional Blues Female)' category.

She also produced two dvd's one live and one instructional.

In 2001, she won the Juno Award for her CD, "Love Coming Down", Foley has also earned seventeen Maple Blues Awards and three Trophies de Blues de France. She has also garnered several nominations at the Blue Music Awards in Memphis, Tennessee.

2018 marked Foley's return as a solo artist with her latest album, "The Ice Queen" (dixie Frog), which featured guest appearances by Billy Gibbons and Jimmie Vaughn.

Sue is currently celebrating the release of her latest video "Dallas Man", from her cd "The Ice Queen"

Now 50 years old, Sue still tours in her solo career and no end in sight.