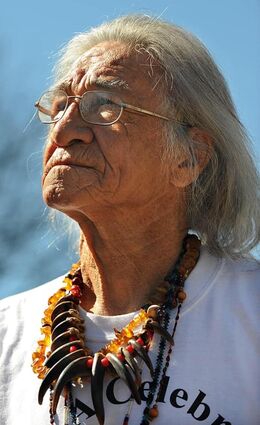 Indian Country has lost a legend. Emmett Ernest Eastman Sr., Ta Wakanhdi Ota "His Many Lightnings", was born at the Little Thunder allotment near Sisseton, SD on December 24th, 1931. He passed away on October 4th, 2021 at Mayo Clinic Hospital in Rochester, MN.

Emmett lived a humble life as the second oldest child of nine children. He was raised on a farm in Northeast South Dakota and learned the importance of hard work at a very young age. He joined the Air Force, served his country, and was discharged honorably after his years of service. He married Frances Crawford, and together they raised seven children and taught them the importance of family and community.

Emmett was active in the American Indian Movement and the pursuit of social justice in native country and throughout humankind. He found his calling in running. Not only was running good for the mind, body and spirit, but it opened the doors to the world. He ran throughout the globe to bring awareness to the atrocities brought upon every plant, rock, tree and most importantly water after colonization. He advocated for Mother Earth through running.

Emmett is the son of Oliver and Bertha Baine-Eastman and leaves behind a brother, Milton Eastman; sisters Carole Standing Elk, June Pink, and Joyce Rice; his children, Leslie, Lynn, Laurie, Lucille, Frances, Emmett Jr., and Anne; 25 grandchildren, 37 great grandchildren and a new great-great grandson and one on the way. He is preceded in death by his wife, Frances Crawford-Eastman and unborn child Charles Alexander Eastman, daughter Lillian Goodeagle, grandsons Ronald Eastman and Leland Thompson.

Funeral services for Emmett Eastman Sr. will be held on Sunday, October 10th at 11:00 AM at Sisseton Wahpeton College. Arvol Looking Horse and Ronald Goodeagle, Jr. will officiate. The drum group will be Mazakute. Interment at Goodwill Church Cemetery.

Chilson Funeral Home, Winsted, MN assisted the family with arrangements. On-line condolences can be made at http://www.chilsonfuneralhome.com