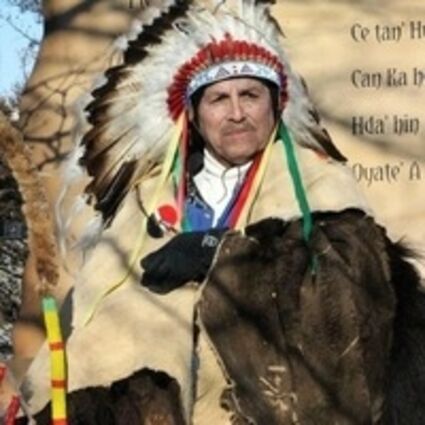 Duane "Doc" Francis Wanna was born on August 26, 1946 in Ft. Totten, ND to Oliver and Angeline (Supangi) Wanna Sr. The family moved to Minneapolis, MN and he graduated from Marshall High, attended two Vo-Tech Schools, and then went to the University of Minnesota where he learned steel construction and had worked in some of the building in the cities. Doc served in the United States Army from Sept 1968 to April 1970. He received the following serves badges, M-14 Sharpshooters badge, M-16 Expert badge, Vietnam Campaign Medal w/Palm, Vietnam Service Medal, two overseas Bars, National Defense Medal; and Vietnam Civil action Unit Citation/Palm. Following the service he returned home. In Doc's early 20's he was involved in the early organizing of the Sisseton Wahpeton Vietnam Veterans Association. Later know as the Sisseton Wahpeton Dakota Kit Fox Society. Doc was involved in numerous ceremonies, funerals, and Wacipi's all over Indian Country. Doc was also involved in the Oyate's very first repatriation and participated in every ceremony after until his passing bringing home our ancestors from museums and universities all over the country to be reburied at the tribe's repatriation grounds. Doc worked for the Sisseton Wahpeton Housing Authority as the housing inspector until his retirement. After the passing of his daughter Frances, Doc took on the responsibility of raising his grandson Xavier and loved him dearly. Doc was an avid sports fan and loved all sports; Doc sponsored the Sisseton Wahpeton Kit Fox softball team and was their biggest fan. Doc was a cherished veteran all over America and was loved by all that he came to know.

Doc passed away on March 23, 2022 at the Tekakwitha Living Center, Sisseton, SD, with his Goddaughter Vanessa by his side and assisted by hospice nurse and staff.